The Janz Corporation is very excited to participate in the 10th annual National Homeland Security Conference June 28-30, 2016 at the Tampa Convention Center. We will be in Booth #401 and will feature equipment to support the Homeland Security professional including Philips emergency care and resuscitation equipment, point-of-care ultrasound- Lumify, Welch Allyn diagnostic care equipment and Laerdal simulation manikins and training products.

This year’s topics will be varied, innovative, timely and focused on a range of emerging and critical topics important to all levels of responders in homeland security, public health, Fire/EMS, law enforcement, and emergency management fields.

Supreme Court unanimously ruled that the VA’s “Rule of Two” is mandatory, and applies to all Department of Veterans Affairs procurements–including GSA/FSS Schedule orders.

In a huge win for service disabled and veteran-owned small businesses, the Supreme Court ruled unanimously in favor of Kingdomware Technologies, Inc., in its case against the Department of Veterans Affairs (“VA”). Kingdomware had brought suit challenging the VA’s failure to set aside an order under the Federal Supply Schedule (“FSS”) for veteran-owned small businesses.

In the ensuing litigation, the VA took the position that it was not required to reserve FSS orders for SDVOSBs or VOSBs because the mandates of the “Veterans First” law did not apply to FSS. In a fairly straight-forward ruling, the Supreme Court found that:

• The requirement to give preference to SDVOSBs and VOSBs extends to FSS orders.

• The Supreme Court also rejected the VA’s argument that an order under the FSS is not a contract; the Court found such orders are clearly contracts.

• The Supreme Court held that the required use of veterans’ preferences applies to all VA acquisitions, and regardless of whether the VA has met its annual veteran contracting goals. This ruling eliminates the mandated cap of 3% for SDVOSB’s and allows VA purchasing managers to use Rule of Two on every contract, including the FSS.

• The two exceptions referenced in the statute allow the VA to make sole source awards to veteran-owned companies under certain circumstances.

The Aftermath of the Kingdomware Decision:
For SDVOSBs and VOSBs, the Supreme Court’s Kingdomware decision is a landmark ruling. Ever since the VA Act was adopted, the VA has taken the position that it may order off the GSA Schedule without prioritizing veteran-owned businesses. Now that The Supreme Court has ruled unanimously in favor of SDVOSB’s, it will have an immediate impact. The Supreme Court decision will provide a major boon to SDVOSBs and VOSBs, ultimately resulting in billions of extra dollars flowing to veteran-owned companies.

One hundred and sixty US military men and women veterans gathered on Saturday June 11th 2016 to play golf at the 2016 USO Military Appreciation Golf Outing held at Hickory Hills Golf Club in Grove City, Ohio.  The USO of Central and Southern Ohio sponsors the event with all proceeds used to support the various USO programs that provide assistance directly to the Ohio military personnel and their families. The weather cooperated for the golfers and their fans, scores were low and the event was an overall success.  Attendees were honored to meet Maj. General Deborah Ashenhurst as she addressed the group of participants and thanked the USO for their dedication to our veterans. The Janz Corporation was proud to be the lead supporter for this event.

The USO has traditionally been known for its entertainment. However, the USO is much more than shows. Major programs of the USO of Central and Southern Ohio include:

• Wright-Patterson Air Force Base Center and Airmen’s Attic – Provides donated household items, furniture and uniforms for those ranked E4 and below.

• Deployments and Returns – Deployment and welcome home events show how much we appreciate the service and sacrifice of our military personnel.

• United Through Reading – This program unites families facing physical separation by facilitating the bonding experience of reading aloud together. 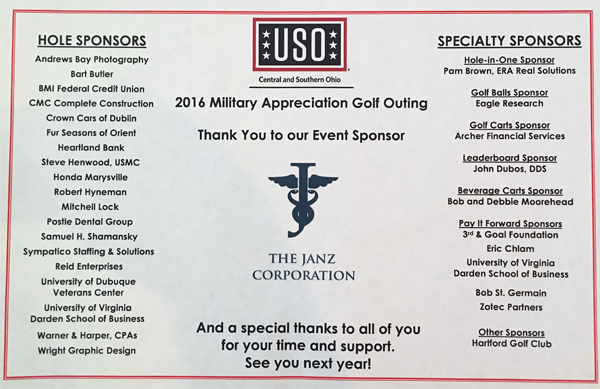 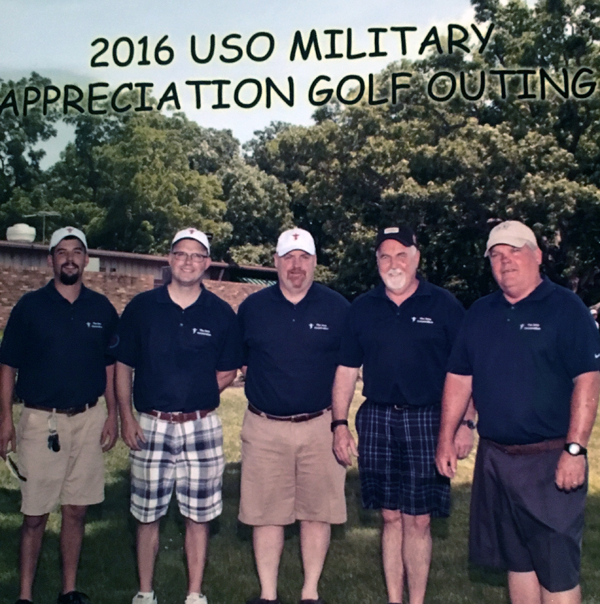 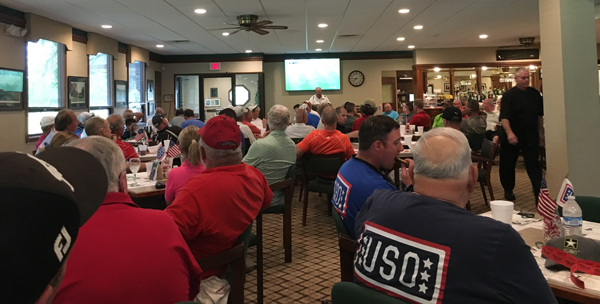